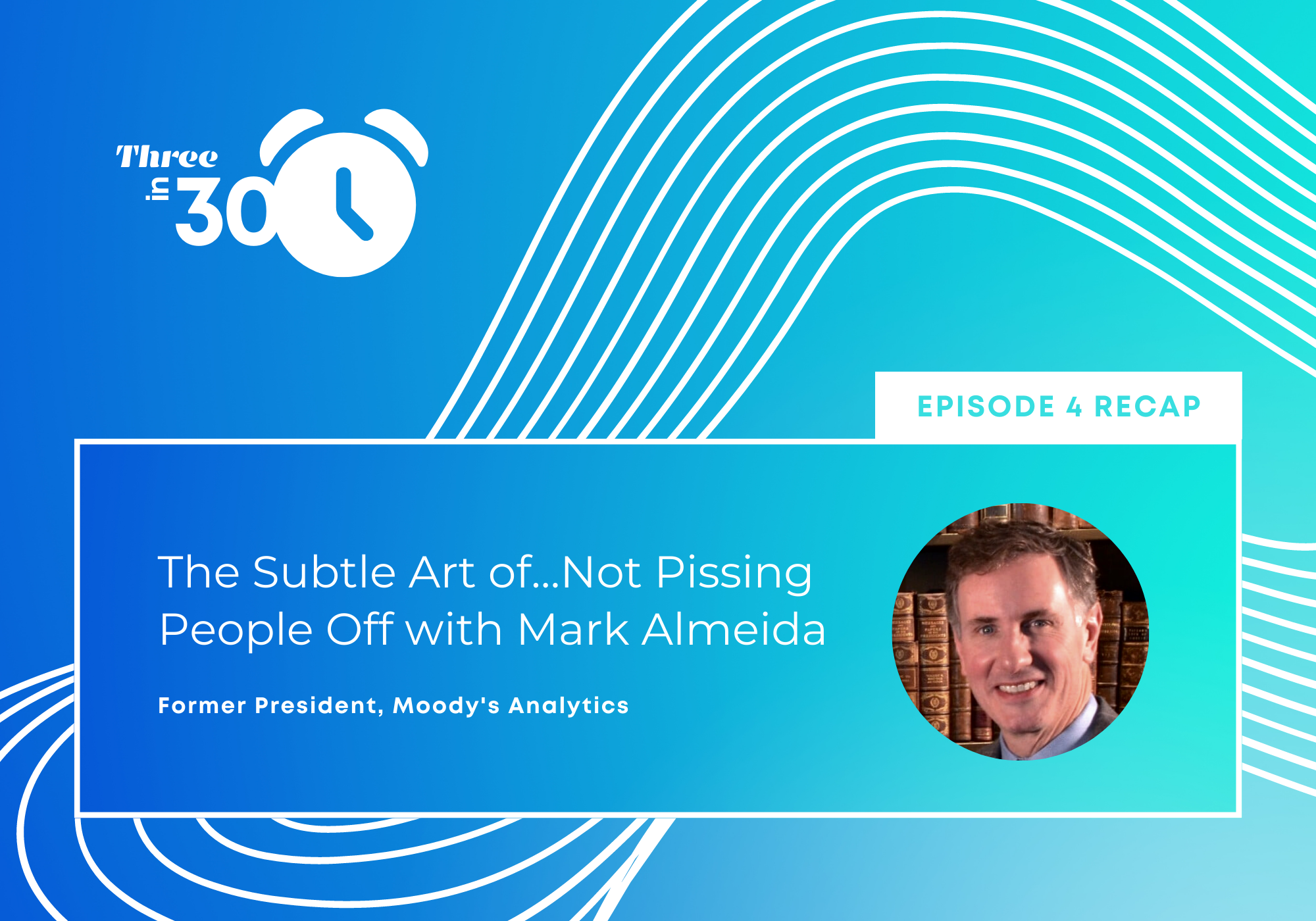 With a resume that includes a thirty year stint climbing the ranks at Moody’s Analytics culminating with his final role as President, Mark Almeida is the go-to choice for career advice. Even better than his answer to the “how’d you do it?” question, were some of the hilarious surprises that came with it: Modest to a fault, Mark chalks up most of his success to “dumb luck”, but the key to getting ahead he says? “Try not to piss too many people off.” It’s hard to argue with that.

In this episode, Mark walks us through his time at Moody’s, unpacking some of the larger events that ultimately shaped the company into what it is today. But that’s just one part of Mark’s story. Today, he’s a prolific investor in the technology space and was kind enough to share some of what he’s learned and to spoon out some sage advice for up and coming startups in the space.

If that’s not enough of a teaser to pull you in, then rest assured, there’s plenty more to sink your teeth into (including a shout out for the COBOL fans out there ;-)). Here’s a few of the highlights from our conversation:

How did the Great Financial Crisis of 2008 affect the ratings agency?

“It [the GFC] was obviously a very stressful period for the company. At the same time, it was really a fascinating experience. And frankly, in the moment, we used to say to each other: ‘Geez, if we weren’t right in the middle of this, it would be a really intellectually interesting situation to think about and analyze’. But we were right in the middle of it, and we felt like we were facing an existential crisis.”

With more than a decade having passed, time has certainly smoothed over some of the rough edges in memory. In addition to being an armchair philosopher, Mark has found the silver lining of what was undoubtedly a very difficult storm to weather:

“In retrospect, it was quite extraordinary. Within a couple of years of the depths of the financial crisis, and all of the public criticism of ratings agencies, the ratings business was stronger than before the crisis. Having gone through that period of questioning and scrutiny, and looking for alternatives, the conclusion was ‘actually, this is pretty good’. For all of the complaints and criticism, when people really sat down and thought about it they decided that the old fashioned way of doing things was pretty good. And with a couple of tweaks, we were able to restore confidence in the work that was being done there.”

I guess there’s something to be said for taking a good thing for granted.

Econ 101: An Introduction to Human Behavior

You mean Psychology 101? Nope, not according to Mark. While our conversation was based purely on the financial, at times, it skewed philosophical, anthropological, and even existential. Mark’s slant on just about everything takes you beyond face value, peeling back layers to get to the root of it:

“That’s the difficulty that you run into in trying to change the behavior of human beings. The reality is, that the way the capital markets and credit markets operate (and have for a long time) is that credit ratings are a fundamental part of how they work, for better or worse. That’s just how the markets operate. There’s not a lot of appetite to adopt a new and different way of doing that type of thing. Ratings are important but they are a tiny piece of the mosaic of the debt capital markets and how they work — they’re a detail. Ripping it out and inserting something new that everybody has to adapt to is a very difficult thing to change, and absent some incredibly compelling reason to do so…it’s hard to motivate a shift in human behavior.”

It could be said that startups belong to the Church of Innovation and worship at the altar of disruption. Too much? Maybe. But the point stands. These days, you often hear people in the startup space getting evangelical about disrupting ‘this’ or ‘that’. Mark’s advice? Don’t.

“My strong advice is: do not go in saying we’re here to ‘disrupt’ something. That’s not a winning proposition. I think that that may be true in many cases, but I don’t think people buy into it, generally speaking. It’s not an attractive thing to the vast majority of consumers. They like to do things better and more efficiently. They like to make more or save more money. But changing things because they’re old or antiquated….they are intrigued, but they’re not going to respond to that. Now, after the fact, once the value is achieved, because they adopt new approaches as a means to an end, we’ll look back on it and realize that we had disrupted an old way of doing things. I dont think it’s a successful way to go to market, however. You have to go in solving problems that exist today, that people know they have and that they are motivated to solve. Those are very tangible things that people who are running a business are willing to do something about.”

And we’re back to psychology.

Our conversation with Mark was equal parts historical reconstruction and a tour of the arts. If not for some pretty choice advice, I’d encourage you to give the episode a listen purely for a refreshingly thoughtful skew on an incredibly noteworthy career.

Interested in going Pro? Fill out the form below and be sure to include as much detail as possible for our team here at Blooma. Choose "Talk to sales" if you'd like to schedule a demo first, or "Buy now" to start your free trial.

Find out what Blooma can do for you

Fill out the form below and be sure to include as much detail as possible for our team here at Blooma. We'll be in touch with you shortly.